I found myself wanting to write today. This is something that hasn’t happened in a while. The catalyst was I happened to be washing dishes and my mind started wandering. This is something I picked up from my father. He would wash, I would dry back when we lived together. I may or may not have stuck myself a bit with a knife, which reminded me of a story for another day about washing dishes with my dad. But I digress.

The past two days I had 9 freshmen move in and the 9 returners will be arriving soon. They come from all over the country and world. They come to WV to be part of the legacy we are building with our squad.

I got an email from a recruit last night that had been weighing on my mind. I get ones like this all the time, but the player asked me if I would be interested in recruiting them but understood if not because some coach/person/friend/family member at some point told them they couldn’t play at the next level because of their (insert nonprototypical trait here).

When I am asked about coaching influences, I usually don’t list my dad, but he is as deserving if not more deserving than any coach in my life.

Before we moved from small town Bloomsburg to the regular sized town of Mechanicsburg PA, my dad coached me in soccer. A sport that he really knew nothing about. When we moved, it was too late for him to be a rec league coach so in 3rd grade I found myself playing for the first coach not to be my dad. It was a bad enough experience that I almost gave up the sport permanently.

Going into 4th grade, my dad took up his coaching ways again. Later in life I would go with him to what I will refer to as ‘the draft’. It was where all the rec league coaches came together. Each coach was allowed a number of keepers from their previous roster and then all remaining players were given a skill level out of 10. The coaches then drafted their teams for the upcoming year. My father hated this process, and wanted me to see it so I could understand. Kids reduced to a number. Something I now see all the time in recruiting.

But stepping back to that 4th grade soccer season. My dad drafted a team that was almost exclusively the neighborhood I lived in so we could have the experience of playing with our friends. If he would have had a draft card score on that, it would probably have been an F-.

Some of us would later become solid athletes, but at that time none of us were anything above average. If memory serves only two of those players went on to even play at the high school level, and none at the college level.

We went undefeated that year. Which isn’t the part I care about 20ish years later. I can still look back and see my dad yelling out Greek Machine when my defender made a good stop. Or Elmer as our other goalie brought down a shot. Placing a season clinching penalty kick into the feet of one of the few nonneighborhood kids on the team. My father showed me the power of positive motivation as a coach. By truly investing and believing in each athlete on the field he was able to make us into something no one would have believed we could have been: A championship team.

So today’s lesson from my father is What can you do today to help someone else become their best?

Remember to keep perspective in times like these. A year ago I wrecked my car and spent months laid up in bed. No tv. No reading. No computer. No working out.

This morning I went for a five mile jog on my treadmill while watching a movie followed by playing with my dog and now writing this on a screen.

I’m not trying to discredit what anyone else is going through at this time. I understand the worries of being without hourly income, or being stuck at home in a bad situation so I’m not trying to say this is all rainbows and sunshine.

Just keep in mind there are positives to every day, quarantine or not.

It’s been a long…I’m not sure what time frame works. The car accident was back in March, for those of you following I’m recovering well.

But of late I’ve been working on some projects(back to my roots with some screenplays, still need more brain capacity before returning to the primal age). Tonight it was about 9pm when I sat down to write. With the full time jobs and part time jobs I like to be in bed at a decent hour these days. And I really really really didn’t want to sit down and write.

There’s projects needing done and deadlines looming, but I wasn’t feeling it.

So I did something I hadn’t done in 7 years. I listened to my old prewriting playlist. As that went through I found my way back to that writer version of me.

I can’t promise my words were anything of legacy or legend tonight, but by taking a few minutes to remember who I am I was able to hit my page count.

So, if you’re out there tonight, feeling stressed or tired, thinking more about your mortgage than your goals, take a moment and remember who you are.

Yeah bet you thought you were done with these! Not so fast.

The thing about writing post-apocalyptic stories is you look to find how far you can push a character and have them still hold onto their humanity. In my series there are two ways it can go…a character can go primal, losing their humanity, or they can become primed finding their end of the world self.

In my younger years I thought this was something that only existed in works of fiction. The older I’ve become the more I see it was a real world trait. The decisions people are faced with every day can change the course of their life.

So this tip is know your line before you get to it.

“You should have known better than to ever make a bet with Justin, even when he loses he wins”

In this edition of might not be a compliment we see that I am not someone to ever let name the stakes of a bet. I will be certain to put the wording in my favor and before it’s agreed upon it’s usually more of an I’m either going to win what I want, or something else I want. (A college go to was betting a girl something where the loser had to make dinner, either way I got the date)

I’m not sure if this is a compliment but I am taking it as such that I can usually maneuver the English language to my benefit. The lesson I have learned from this in life is most people hear what they want to hear, not what you’re saying. So phrase it in a way that their brain will interpret what they want it to be and you can have the outcome you want.

And more importantly, when not making bets, be certain what you’re saying is being heard as you want to be heard, not as the receiver wants to hear it.

When I was younger(obviously since I’m writing the story it had to have happened when I was younger…if I was grading this paper I’d of cut that from it…but I’m not so enjoy my waste of words) a friend of mine had just listened to the song NO HANDLEBARS. Quick summary of the song for those of you who don’t know it is there are two friends growing up and through a series of one ups one of those friends becomes a dictator, the other opposes him. This friend told me that he would trust knowing that if he ever became a dictator I’d be the one to assassinate him.

Soooooo part of me is like am I that heartless, or am I that logical. But in the end I take the positive of they’d trust me to do the right thing over my emotion and their best judgement. I can’t say it’s true, but this concludes another edition of not sure if this is a compliment. 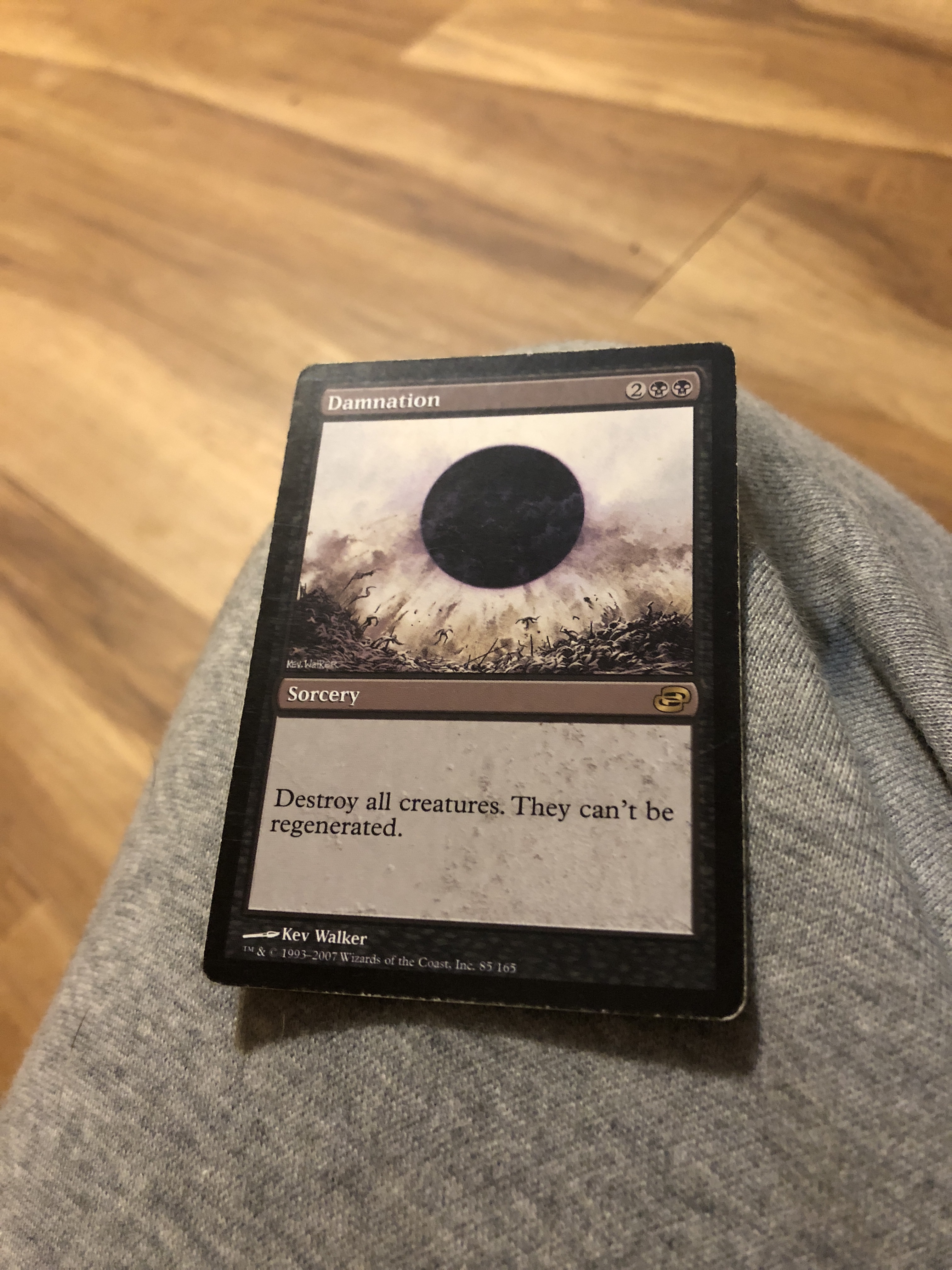 Remember when something breaks you have two choices: quit or carry on. Obstacles will always be in your way but that’s no excuse to not finish what you start.

During a phone call with my dad this evening he pointed out I hadn’t posted in a while. The long and short of it is I am tired. Reaching that point of the semester with teaching/coaching/recruiting that I am exhausted.

So as I sit here on my treadmill getting up the motivation to run I look back a few hours into my day when my girls were so spent that they had to drag themselves out of the water.

I feel as long as I am putting other humans through such tortures I should be no exception.

My legs hurt. My knee is sore as shit. My hip is out of alignment. My back feels like someone took a whip to it. My shoulders are in no way pleasant. And most difficultly my mind is broke at the moment.

But that’s why I have to stand up, go for a run, finish homework, and put some words on the page before I sleep.

My father made sure I was stronger than life. So I run, and as I run I’m reminded of the words of my good friend Tim Smith as spoken as he drug my dying ass on a run around Wilkes-Barre during out masters… “every runner is running toward something or away from it.” 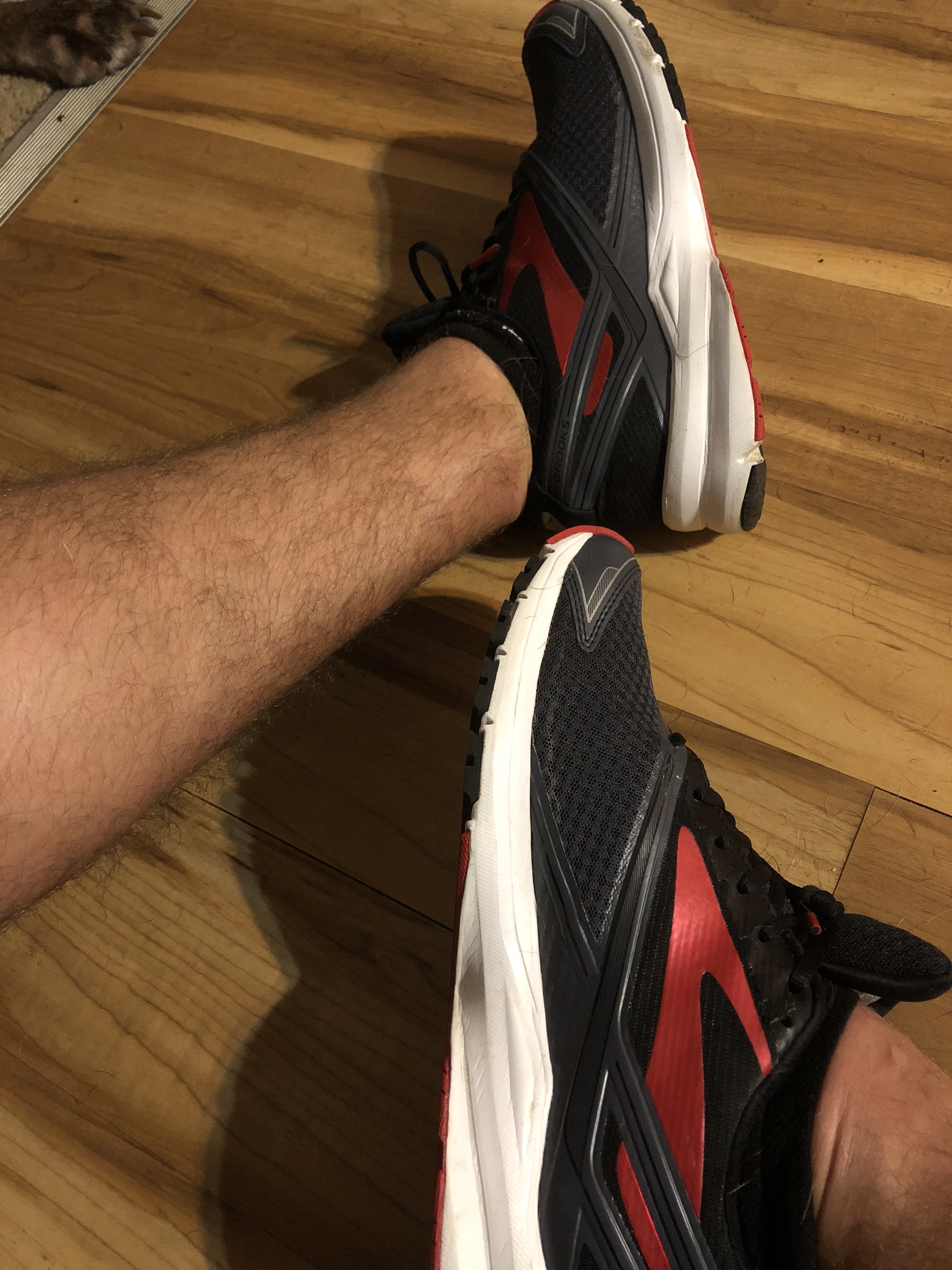 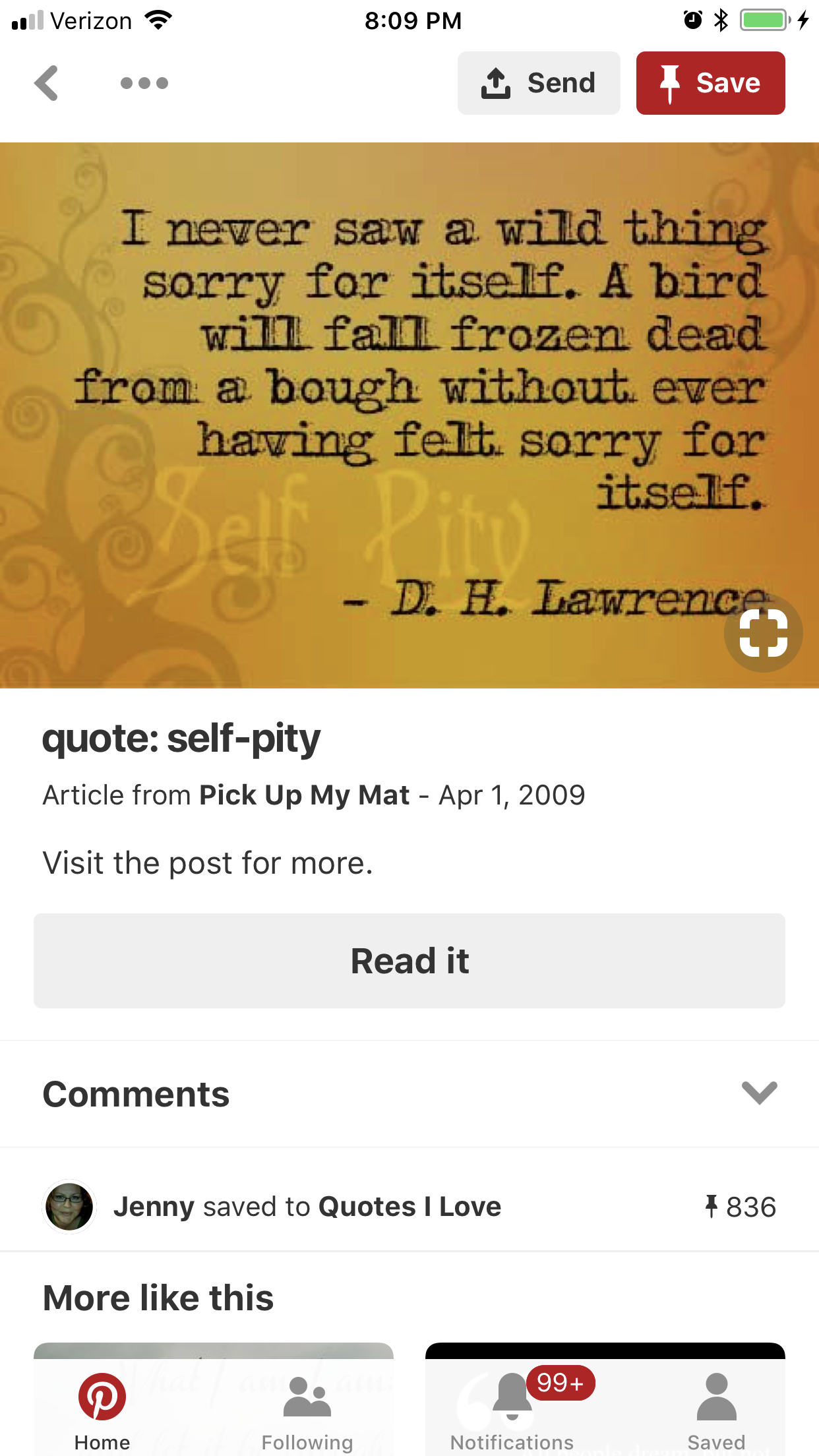 Anything that is given can be taken away, anything earned will stay. 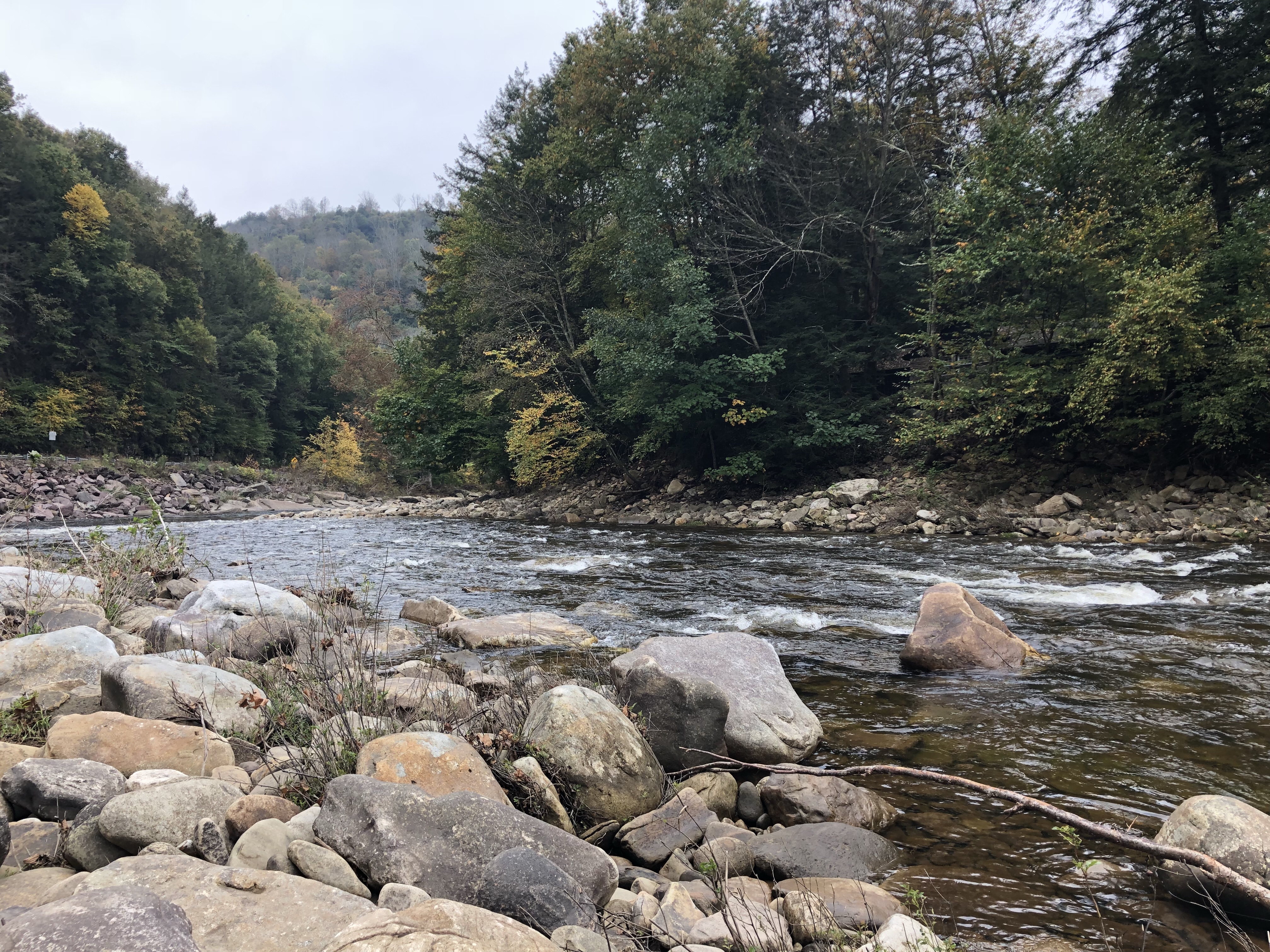